Through Their Eyes: A Graphic History of Hill 70 and Canada’s First World War 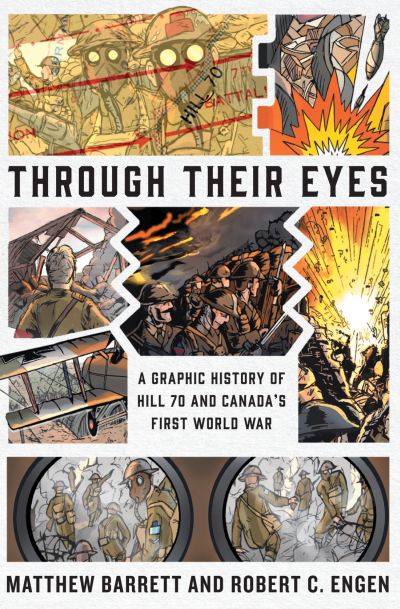 By the summer of 1917, Canadian troops had captured Vimy Ridge, but Allied offensives had stalled across many fronts of the Great War. To help break the stalemate of trench warfare, the Canadian Corps commander, Lieutenant-General Arthur Currie, was tasked with capturing Hill 70, a German stronghold near the French town of Lens.

After securing the hill on 15 August, Canadian soldiers endured days of shelling, machine-gun fire, and poison gas as they repelled relentless enemy counterattacks. Through Their Eyes depicts this remarkable but costly victory in a unique way. With full-colour graphic artwork and detailed illustration, Matthew Barrett and Robert Engen picture the battle from different perspectives – Currie’s strategic view at high command, a junior officer’s experience at the platoon level, and the vantage points of many lesser-known Canadian soldiers who made the ultimate sacrifice. This innovative graphic history invites readers to reimagine the First World War through the eyes of those who lived it and to think more deeply about how we visualize and remember the past.

Combining outstanding original art and thought-provoking commentary, Through Their Eyes uncovers the fascinating stories behind this battle while creatively expanding the ways that history is shared and represented.

Through Their Eyes: A Graphic History of Hill 70 and Canada’s First World War