Rags of Night in Our Mouths 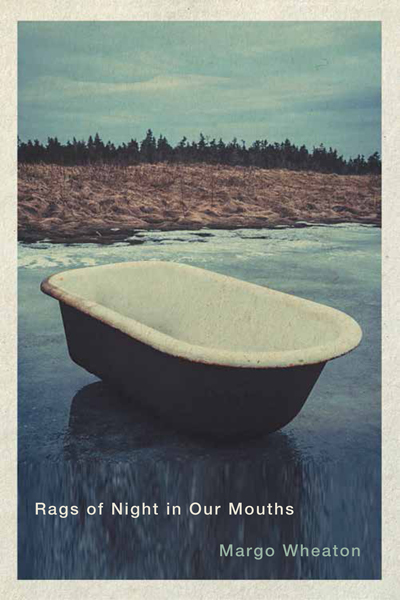 The restless gnaw of wanting to walk the wailing field of this history, / throw heels of bread to the ghosts that wait. Standing in the midst of her childhood home, Margo Wheaton was struck by two things: the extent of the damage caused by her father’s and stepmother’s alcoholism and the life force that pulsed in the once-vibrant rooms and yard – in the abandoned trees, neglected flowerbeds, and gardens her parents had planted and tended for decades.

Radiant, grieving, and intensely musical, Rags of Night in Our Mouths is an exploration of human and environmental states of precarity and vulnerability. In the opening suite, Wheaton draws upon her family’s deep roots in the Tantramar Marsh area and constructs a hallucinatory world of fragility, chaos, and searing natural beauty as she writes her own version of Maritime gothic. Employing a variation of the ghazal, a historically Persian form popularized in Canada by the late New Brunswick-based poet John Thompson, she surveys the ruins of her working-class childhood home, a thriving place now ravaged by generational alcoholism and despair. Directed at first toward an absent beloved – a convention of the ghazal tradition – the focus moves in the second suite to the teeming, non-human world of an endangered saltmarsh on a wild shore of the Northumberland Strait bordering Nova Scotia, New Brunswick, and Prince Edward Island. In the book’s closing suite, Wheaton honours a landscape slated to be destroyed and pays homage to “the broken-hearted, the bereaved” who walk the ragged shoreline, struggling to make sense of losses and death.

Meditative and beautifully crafted, Rags of Night in Our Mouths calls us to engage passionately with our suffering world.

Rags of Night in Our Mouths