Mussolini Also Did a Lot of Good: The Spread of Historical Amnesia 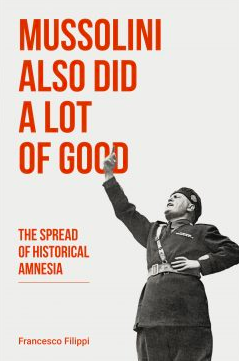 Surgically, but with wit, Francesco Filippi demolishes each and every myth that has taken root about Mussolini and fascism in an uplifting handbook for political and intellectual self-defense. No stones are left unturned, including the colonial devastation of Libya and Ethiopia.

Legend would have it that Mussolini put roofs over Italians’ heads, developed the economy, had trains running on time, stood up for justice and against the mafia, protected the Jews from Nazi Germany, was a feminist, and put Italy on the map as a respected power. The founder of fascism’s only mistake was allying with Hitler.

Though this is entirely false, it didn’t prevent Antonio Tahani, president of the European Union, from declaring in 2019 that “if we must be honest, he [Mussolini] did positive things to realize infrastructures … he reclaimed many parts of our Italy.” In fact, only 6 percent of the improvements referred to were done during the 21 years of fascist rule.

Though written first for Italians, this book is relevant and timely for North Americans. Through a study of Mussolini and Italy, Filippi shows how such legends are built on webs of lies, manipulation of history, and constant uncontested repetition, explaining at the same time why so many people fall victim to the propaganda.

Mussolini Also Did a Lot of Good: The Spread of Historical Amnesia

Towners and Other Stories