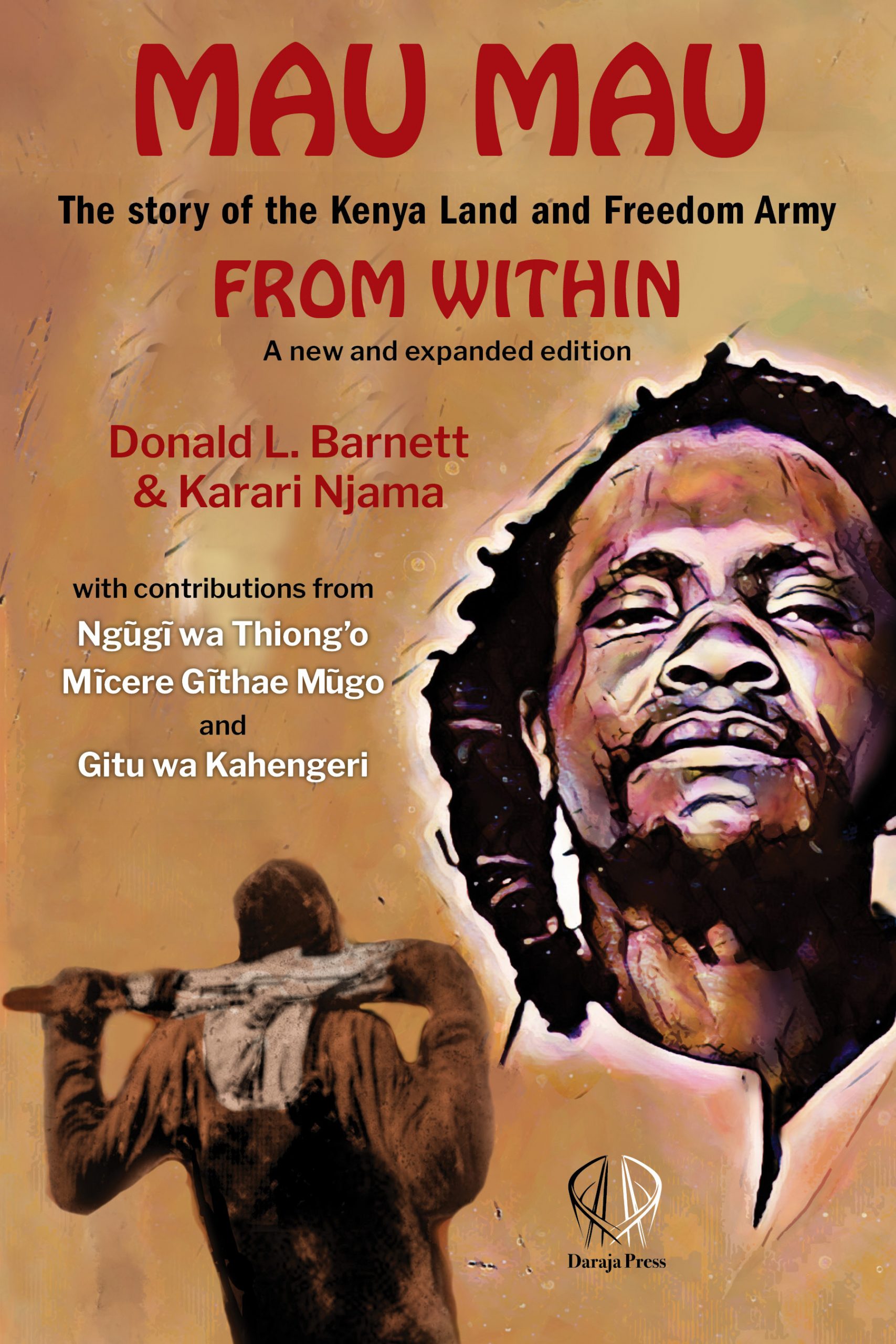 The inside story of the struggles of the Kenya Land and Freedom Army, referred to by British colonialism as the “Mau Mau rebellion,” is little known today. The autobiographical material written by Karari Njama (a senior leader in the Mau Mau hierarchy) and compiled by Donald L. Barnett was first published by Monthly Review Press in 1966, as Mau Mau From Within: An analysis of Kenya’s Peasant Revolt. It was reprinted in 1970; it has remained out of print for many years. As the late Basil Davidson put it in his review of the first edition: “Njama writes of the forest leaders’ efforts to overcome dissension, to evolve effective tactics, to keep discipline, mete out justice… and to teach men how to survive in those merciless forests. His narrative is crowded with excitement. Those who know much of Africa and those who know little will alike find it compulsive reading. Some 10,000 Africans died fighting in those years. Here, in the harsh detail of everyday experience, are the reasons why.”

The book is an extraordinary story of courage, passion, heroism, combined with recounting of colonial terror, brutality, and betrayal. It is a story of how the very idea of being “Kenyan” was intimately linked to the idea of freedom, a connection that was destroyed not only by the firepower of the British, but also by those who collaborated and established themselves as the beneficiaries of neocolonial rule. Disconnecting notions of freedom from identity left only a caricature that rapidly descended into tribalism and ethnicity.

This momentous story of the struggle for freedom described here is relevant not only for a new generation of Kenyans but also for all those engaged in emancipatory struggles internationally. For so long as the experiences arising from the struggles described in this book are perceived as merely “African” or “Kenyan,” it is not possible to fully grasp the contributions they have made to the struggle for a universalist humanity.

What is recounted in this publication is more than an “analysis of a peasant revolt.” It is above all a history of the Kenya Land and Freedom Army. As Ngūgī wa Thiong’o points out in his Preface to this new edition, “we don’t have to use the vocabulary of the colonial to describe our struggles.” We were tempted to rename the book Kenya Land and Freedom Army from Within. But because the original title has wide recognition, and and as one of the characteristics of movements of the oppressed is to appropriate derogatory terms used by their oppressors and repurpose them as an expression of pride in their own experiences, this book retains the original title, but with a change in the subtitle as The Story of the Kenya Land and Freedom Army.

We were delighted that Karari Njama was able to provide us with a Prologue to the new edition (Kamoji Wachiira, a former political prisoner, connected us with Karari and translated the text of the Prologue). Shujaa Hon Dr Gitu wa Kahengeri, Secretary-General of the Mau Mau War Veterans Association, reminds us how the veterans of the liberation movement, like Karari Njama, continue to live in extreme poverty today despite the enormous contribution that they made to the struggle for freedom.

Kenya’s leading writer and academic, Ngūgī wa Thiong’o, points out in the Preface how so much of the narratives about the Kenya Land and Freedom Army has been written from “without,” emphasizing the importance of a book that speaks to the personal testimony from within the movement. We are honoured to have Mīcere Gīthae Mugo, Emerita Professor of Literature at Syracuse University, provide reflections on the importance of the republication of this historical text. There are many who, as children, lived through the terrifying events of the Emergency during which so many were tortured and killed by the British (and their local collaborators) and whose psyche remains deeply affected by what they witnessed.  Kamoji Wachiira describes some of these experiences vividly in his Introduction to the new edition. He highlights the extent of betrayal by successive post-independence governments, and the development of the post-independence revival of resistance which he was a central part of. He also emphasizes the importance for a new generation of Kenyans “to gain not only a deep understanding of Kenya’s revolutionary history but also to reflect on what lessons may be drawn for the struggle to achieve real freedom.”

The original publication had no biographical information about Don Barnett. Few are aware of the extent of Don’s political engagement with the cause of liberation, of which Mau Mau From Within was only one aspect. He was a founder of the Liberation Support Movement in Canada, and had close contact with the MPLA (Popular Movement for the Liberation of Angola). Don sadly joined the ancestors in 1975. We are fortunate, however, that Don and Daphne’s son and daughter, Michael Barnett and Dawn Barnett, were able to provide, together with Ole Gjerstad, a revealing biography.

We have endeavoured to retain the content of the original book (but for a few minor corrections) including the original Selected Bibliography. An updated Further Reading list is provided.

Talking to a Portrait: Tales of an Art Curator