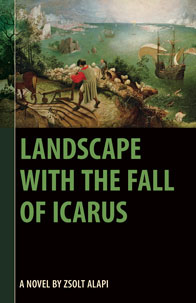 The protagonist of this novel, Stephen, is twice exiled–first from his birthplace, Hungary, and then from the United States as a Vietnam draft resistor who settles in Montreal, Quebec. Stephen becomes obsessed with W.H. Auden’s poem, ‘Musėe des Beaux Arts’ and Bruegel’s painting Landscape with the Fall of Icarus, an obsession about the nature of suffering and art that leads to his attempted suicide and to the subsequent chaos of his life. Set primarily in Montreal, the novel also travels to the places of Stephen’s past: the Hungary of his childhood, Europe, the United States, and the Montreal of his youth through his memories and reflections. Despite its comic undertone, the novel explores the illusions we construct to provide value to our lives, the nature of love and the erotic, and the path towards compassion and meaning.