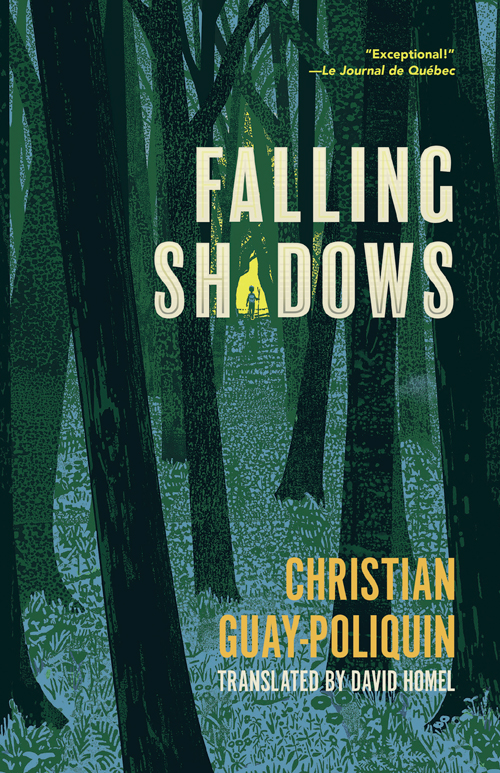 In Falling Shadows, a lone man walks in the forest towards the hunting camp where his family has taken refuge to escape the upheaval caused by a widespread power failure. He knows he is threatened. One day, having lost his way, a twelve-year-old boy, mysteriously fearless and familiar, calls out to him. The unusual duo will have to face the hostility of the wilderness and thwart the offensive groups that now inhabit the woods.

This is Québec writer Christian Guay-Poliquin’s much anticipated third instalment in the series of gripping post-apocalyptic novels initiated with Running on Fumes and prolonged by the international bestseller The Weight of Snow, both translated by Governor General’s Award winner David Homel and published by Talonbooks in 2016 and 2019. The Weight of Snow was long-listed for the 2020 Sunburst Award and was translated into fifteen languages. Throughout these novels, Guay-Poliquin has developed a unique storytelling craft; his narratives are grounded in the demands and details of daily life and in a world ripe with experience.

Adventurous and cleverly assembled, Falling Shadows questions the meaning of community and revisits the thrilling excitement associated with the wilderness and survival classics like McCarthy’s The Road and King’s The Stand