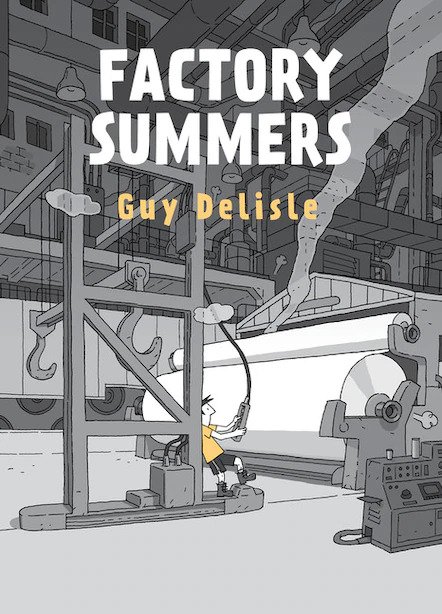 For three summers beginning when he was 16, cartoonist Guy Delisle worked at a pulp and paper factory in Quebec City. Factory Summers chronicles the daily rhythms of life in the mill, and the twelve-hour shifts he spent in a hot, noisy building filled with arcane machinery. Delisle takes his noted outsider perspective and applies it domestically, this time as a boy amongst men through the universal rite of passage of the summer job. Even as a teenager, Delisle’s keen eye for hypocrisy highlights the tensions of class and the rampant sexism an all-male workplace permits.

As the paper industry slowly began to move overseas, Guy worked the floor doing physically strenuous tasks. He was one of the few young people on site, and furthermore got the job because of his father’s connections, a fact which rightfully earned him disdain from the lifers. Guy’s father spent his whole working life in the white-collar offices above the fray of the machinery, scheduled from 9 to 5 instead of the rigorous 12-hour shifts of the unionized labor. Guy and his dad aren’t close, and Guy’s witnessing of the workplace politics and toxic masculinity leaves him reconciling whether the job was the reason for his dad’s unhappiness.

On his days off, Guy found refuge in art, a world far beyond the factory floor. Delisle shows himself rediscovering comics at the public library, and preparing for animation school—only to be told on the first day, “There are no jobs in animation.” Eager to pursue a job he enjoys and to avoid a career of unhappiness, Guy throws caution to the wind.

Factory Summers was translated by Helge Dascher. Dascher has been translating graphic novels from French and German to English for over twenty years. A contributor to Drawn & Quarterly since the early days, her translations include acclaimed titles such as the Aya series by Marguerite Abouet and Clément Oubrerie, Hostage by Guy Delisle, and Beautiful Darkness by Fabien Vehlmann and Kerascoët. With a background in art history and history, she also translates books and exhibitions for museums in North America and Europe. She lives in Montreal.

Dominoes at the Crossroads