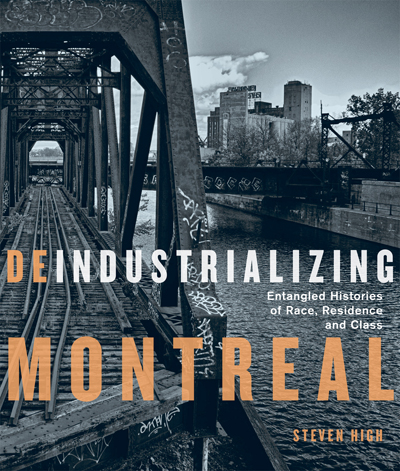 Point Saint-Charles, a historically white working-class neighbourhood with a strong Irish and French presence, and Little Burgundy, a multiracial neighbourhood that is home to the city’s English-speaking Black community, face each other across Montreal’s Lachine Canal, once an artery around which work and industry in Montreal were clustered and by which these two communities were formed and divided.

Deindustrializing Montreal challenges the deepening divergence of class and race analysis by recognizing the intimate relationship between capitalism, class struggles, and racial inequality. Fundamentally, deindustrialization is a process of physical and social ruination as well as part of a wider political project that leaves working-class communities impoverished and demoralized. The structural violence of capitalism occurs gradually and out of sight, but it doesn’t play out the same for everyone. Point Saint-Charles was left to rot until it was revalorized by gentrification, whereas Little Burgundy was torn apart by urban renewal and highway construction. This historical divergence had profound consequences in how urban change has been experienced, understood, and remembered. Drawing extensive interviews, a massive and varied archive of imagery, and original photography by David Lewis into a complex chorus, Steven High brings these communities to life, tracing their history from their earliest years to their decline and their current reality. He extends the analysis of deindustrialization, often focused on single-industry towns, to cities that have seemingly made the post-industrial transition.

The urban neighbourhood has never been a settled concept, and its apparent innocence masks considerable contestation, divergence, and change over time. Deindustrializing Montreal thinks critically about locality, revealing how heritage becomes an agent of gentrification, investigating how places like Little Burgundy and the Point acquire race and class identities, and questioning what is preserved and for whom.

I Am the Earth the Plants Grow Through